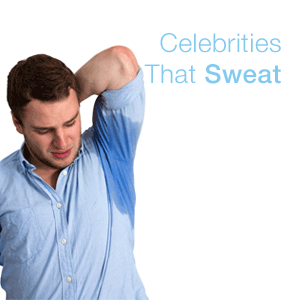 Excessive sweating can be a distressing condition, and it’s easy to feel isolated and despondent about the problem. It can help to know you’re not alone, and that even the world’s most beautiful people suffer with embarrassing sweat marks, wet patches and body odour. Here are some examples of the people you’d least expect to sweat. Cameron Diaz At a screening of What To Expect When You’re Expecting Ms Diaz was photographed with expanding moisture on her sheer white blouse, and not for the first time. In 2009 she made the gossip columns for her damp pits at the Teen Choice Awards, and her name frequently gets mentioned in forums dedicated to sweat rings on the red carpet. America Ferrera The Ugly Betty star is often held up as example of a global superstar with the confidence to walk the red carpet no matter how wet her brow. From charity events to film premieres, Googling “America Ferrera Sweat” yields a veritable photo library of illustrations. Lee Evans The hilarious physical comedy funnyman is famed for how sweaty he gets during his stand-up performances. Few know, though, that his problem is so bad that his regular drycleaner in Southend eventually refused to take any more of his business. The store owner explained that he was unable to return his performance suits in anything like mint condition as sweating rots the stitching. All that sweat, and still we love him! Meg Ryan The When Harry Met Sally actress has some of the dampest armpits in Hollywood, but she is adamant that won’t stop her from demonstrating thanks for her fans. She continues to raise her arms and wave at her supporters from the red carpet, despite two decades worth of photos as evidence to how hot that walk can get. If you suffer with controlling your sweat, know you’re not alone. Half of Hollywood seem to understand. If you’re looking for a solution to your problem, consider our new SweatX laser treatment, or botox in the sweat glands.
Share it!