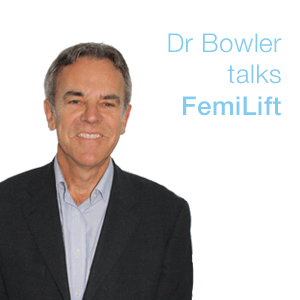 Dr Patrick Bowler has written for The Huffington Post today, asking why British media won’t talk about… erm, the vagina.

On the back of Courthouse Clinics’ innovative new vaginal rejuvenation treatment FemiLift, Dr Bowler reflects on our reticence to discuss post-birth vaginal issues such as reduced sexual pleasure and stress urinary incontinence.

He writes: “For weeks we’ve called journalists and emailed editors to tell them about FemiLift. With all of our other innovations beauty editors frequently jump at the chance to inform their readers of the latest developments in non-surgical cosmetic enhancements. And yet with this, we’ve watched helplessly as the tumbleweed has blown across the yard, having been met with a stony silence.”

“Collectively, my team and I have wondered if it’s an anti-women attitude that has limited coverage. One national newspaper commissioned an interview with one of our patients — a woman totally transformed by her procedure. They took photographs of her, wrote up a piece about how potentially problems such as stress urinary incontinence and sexual displeasure could be alleviated, and at the last minute the feature was pulled. Interestingly, the freelance journalist who wrote the piece is female, the sub-editor of the health section is female… and the newspaper editor who “hated it” is a man.”

Dr Patrick goes on to explore the French system for women who have just given birth, wherein they are given classes on strengthening muscles weaken by the birthing process. He suggests that by doing this there is an implicit understanding that “not only should they not be ashamed to talk about the issue, but that they must.”

He quotes American Claire Lundberg, who gave birth in France, who says the French do not shy away from the fact that women will want to have sex again after their baby, and wonders why we don’t more freely talk bout this.

The full article is here.