Lack of Sleep Linked to Obesity

Lack of Sleep Linked to Obesity 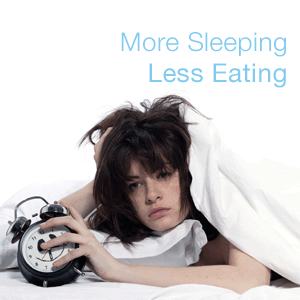 German researchers have possibly explained the link between getting less sleep and being overweight, say recent news reports. Scientists at the University of Tubingen, led by Manfred Hallschmid, found that sleep deprivation can be responsible for making the body crave more calories, whilst also limiting its ability burn them off- meaning weight gain or even Type 2 diabetes. Researchers measured participants´ hormone levels with blood tests and accelerometers, calculating how much energy was burned by indirect calorimetry- an estimation of a person´s heat production. Results showed that even after only one night of disrupted sleep, subjects reported lethargy and moved around less than they did after a full nights´ sleep. Those who forwent sleep for 24 hours reported the most dramatic effects, producing the highest levels of “hunger hormone” ghrelin. The higher the levels of ghrelin, the hungrier they reported feeling, and the more calories were consumed. A study of nine men showed that a 24 hour sleep deprivation saw a 22% increase in hunger hormones. Another experiment with 14 men reported a dip by up to 20% in the rate of calorie burning after forgoing sleep. William Killgore, an assistant professor of psychology at Harvard Medical School, found evidence to suggest that sleepiness is also associated with reduced activity in the brain region responsible for controlling behaviour – meaning that being tired also means you´re also more likely to reach for calorie-laden junk food after a bad night´s sleep, ultimately seeing weight gain.
Share it!