What Can You Treat With Botox®?

What Can You Treat With Botox®? 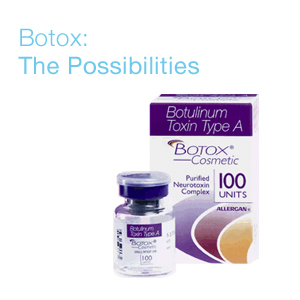 For a relatively young treatment, Botox® has quite a big reputation. It was originally documented to relieve muscle spasms in the 1950s but was only licensed for medical use in the UK in 1994. Since then it has become progressively popular in the cosmetic industry and the global market has been predicted to be worth $2 billion by 2018. Known chemically as Botulinum Toxin Type A, it works by blocking the signals sent from the nerves to the muscles in the injected area. This temporarily weakens the muscles so that they are unable to contract and, as a result, the surrounding skin appears tighter and smoother.

Botox® was originally used to treat twitches, particularly around the eye for conditions such as strabismus, but nowadays it is commonly administered cosmetically to smooth wrinkles and fine lines on the face. But there are continual tests being carried out to establish whether Botox® could benefit other conditions as well. Botox® has been reported to act as a temporary non-surgical alternative to a breast uplift. The Botox® is injected into the pectoral muscles which relaxes them, subsequently raising the shoulders and lifting the breasts. Although this may seem a harmless substitution for the invasive breast lift procedure, many professionals are reluctant to carry it out due to the lack of evidence surrounding its benefits or reliability. A great deal of Botox® would be required to prompt any results and this would be incredibly expensive, especially since the effects of Botox® last a matter of months. Also the breasts would have to be relatively small – an A cup or B cup – to be lifted in any significant way. Because of the unpredictable outcomes this would not be offered in any reputable cosmetic clinic. Although there is no concrete evidence to support this theory scientifically, it seems logical for doctors to experiment with Botox® in this manner. However, a fairly less believable claim is that Botox® can aid hair loss… The idea began in Beverly Hills with aesthetic surgeon Dr Simon Ourian who, upon habitually injecting his mother with Botox® to calm her chronic headaches, noticed that her hair had begun to regrow in the treatment area. His mother’s hair loss was a result of chemotherapy and so it is uncertain whether it was the injections or the inevitable regrowth that prompted the changes. Ourian believes that as Botox® is a relaxant it helped to improve blood circulation, which in turn stimulated hair regrowth. His own studies are inconclusive and there is no scientific or medical evidence to back his claims. But there are some certified uses for Botox®. Hyperhidrosis, a condition in which excessive amounts of sweat is produced, has been proven to respond well to treatment. The condition occurs as the chemical signals sent from the nerves to stimulate the sweat glands become overactive. The Botox® relaxes this over-activity which reduces the level of sweat considerably. The sweat is not sent anywhere else on the body but is simply stopped from being made. Also, you won’t overheat because only a small percentage of sweat glands are located in the underarm, meaning the rest of your body is free to produce moisture normally. Another great use for Botox® is for people suffering with chronic migraines. The Botox® is injected into particular muscles around the head, neck and shoulders, and is thought to work by inhibiting the release of peripheral nociceptive neurotransmitters. This may then have a knock-on effect on the central pain processing systems that generate migraine headaches. This is FDA approved for it has been very successful in a number of clinical trials. If you are interested in tackling migraine pain or excessive sweating with Botox®, Courthouse clinics offer these treatments in several of our clinics across the country – and it will always be administered by a fully qualified doctor. Call our customer care team today on 0845 555 5050 for further advice and to book a consultation with a doctor. For further information you can also visit our website by clicking here.
Share it!